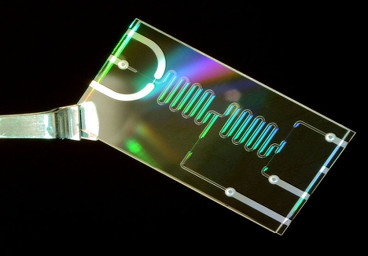 Droplet-based microfluidics, molecular networking, droplet-based communication. Droplet microfluidics refers to manipulation and control of little amount of fluids flowing into channels of micro-size scale. We are concerned with understanding microfluidic flow dynamics and their propagation characteristics. These concepts are then used to devise networking algorithms to route droplets in a controlled manner through complex microfluidic networks.

Microfluidics is a multidisciplinary field with practical applications to the design of systems, called Lab-on-a-Chip (LoC), where tiny volumes of fluids are circulated through channels with millimeter size and driven into structures where precise chemical/physical processes take place. At this scale, fluids may exhibit specific behaviors that are unobserved at macro scales. These properties are at the basis of a number of applications, ranging from the inkjet printer heads to DNA sequencing chips, and have been recently exploited in the development of Lab-on-Chip (LoC) systems or, more generally, Microfluidic Machines (MMs), that are currently used for different purposes, included the synthesis of particles for therapeutic delivery, drug discovery, biomolecule synthesis, diagnostic testing, DNA sequencing.
The interest on microfluidics has been increasing over the last few years and, recently, droplet-based microfluidic circuits capable of performing simple logical operations have been proposed and experimentally tested, paving the way to a new research branch known as microfluidic networking. The overall objective of microfluidic networking is to realize switching and networking elements that make it possible to interconnect specialized LoCs in a flexible and modular system, possibly using only hydrodynamics properties. Such an architecture would unleash the still largely unexpressed potential of the microfluidic technology, producing a leap forward in many fields, included the pharmaceutical, chemical, and medical sectors. This challenge calls for interdisciplinary competences, which range from telecommunication engineering to physics and chemistry, and can open the way to a number of exciting research trails!

The first component of any networks are the the switches. Microfluidic networks are no exception. A possible solution to switch droplets across a microfluidic network consists in electro-hydrodynamic actuation that, however, requires specific and complex circuitry with a large number of electrical connections and high power source. Furthermore, the contact of electrodes with fluids may give rise to corrosion problems and unwanted reactions. Most of these problems are solved by adopting a purely hydrodynamic approach that only relies on the actuators (pumps and reservoirs) at the periphery of the chip (the boundary system) and on the channel geometries and hydrodynamic forces that act on the fluids to control the droplets in the network. The basic principle is that droplets flow along the path with minimum instantaneous hydraulic resistance, meanwhile increasing the resistance of the channel they are crossing. Thus, an isolated droplet entering a T or Y junction through the inlet will proceed towards the outlet with minimum instantaneous hydraulic resistance, while a closely following droplet may be driven to the other outlet. Therefore, it is possible to steer a payload droplet through a series of junctions by modulating its distance with respect to a certain number of control droplets. However, the flow behavior in complex microfluidic systems is affected by a number of interdependent factors that make the fluid flow at any one location depend upon the properties of the entire system. Furthermore, the time behavior of a droplet-based microfluidic network is also difficult to predict, because the motion of the droplets across the channels will continuously change the hydraulic resistance of different parts of the network and, hence, the flow rates of the continuous phase in different channels that, in turn, affect the speed of the droplets. All these interdependencies make extremely difficult to figure out the effect of combining together simple structures into a more complex system and to assess the time dynamics of a network in presence of multiple droplets. In this area, one interesting challenge concerns the comparison between switching mechanisms based on different physical quantities, such as the inter-distance between the droplets, or their length.

Recently, physics researchers have advanced the idea of exploiting microfluidic systems to build tiny computing units, and the possibility of using them in order to realize simple boolean functions has been experimentally proved. Even more interesting is the recent proposal of introducing communication notions in the microfluidic domain, e.g., encoding information in the distance between consecutive drops. Inspired by these works, we carried out some experiments using real microfluidic devices with the intent of investigating a proper way to transmit information in a microfluidic channel. In particular, we exploited the T-junction droplet generator governing laws in order to modulate the length of generated droplets (and, consequently, their interdistance) in a sort of binary Pulse Amplitude Modulation scheme. Results show that the noise that affects both droplet length and inter-distance can be modeled as a zero-mean normal random process, whose variance, however, depends on the transmitted symbol, i.e., on the working point of the system. More specifically, droplet-based modulation exhibits stronger noise for symbols associated to relatively short droplets, while interdistance-based modulation is more noisy when droplets are more spaced apart. Overall, however, droplet interdistance appears to be more robust a signal than droplet length for PAM modulation, though both techniques can achieve relatively low bit error probability in the considered scenarios. Although this analysis moves some initial steps toward the performance characterization of a microfluidic-based PAM transmission system, the way to go is still very long and unexplored. As an example, the transient behavior exhibited by the droplet generation circuit when changing the volumetric flow rates at the input has not yet been analyzed, nor has it been considered the actual bitrate that can be achieved with such a mechanism. These an other interesting challenges are left for future work.